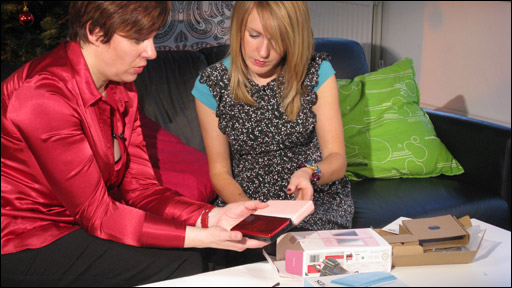 CBBC – Newsround – How to spot a fake Nintendo console

Christmas shoppers are warned not to buy fake game consoles, as they could cause injury.

But it can be very difficult to tell the fake Nintendo DS and DS Lite apart from the real one.

A huge clue is the price, fakes are usually much cheaper than the genuine item.

But there are other things to watch out for as you can see below:

Please keep in mind that some consoles are sold used after being refurbished and may then be in another box or not have the charger, but they will not be sold as new

Counterfeits usually do not come with all the proper information and accessories, so they often come in SMALLER boxes.

Look at the two boxes in the picture.

The pink at the top is the real thing, while the smaller blue box is a fake.

There should be plenty of stuff inside the box, including power adapters and information booklets.

The image shows all of the things that come with the genuine item.

But if the charger wasn’t inside the box, but came in a separate envelope, it’s probably a fake.

See the information booklet that came with the console.

If it looks like the flyer on the left, it’s a fake.

Real Nintendo consoles come with information booklets like the one on the right.

The safety logo must be part of the plastic.

If it is only a sticker, it is a fake and it can be dangerous.

Turn the console over. Again, the security logo should be branded into the plastic, like the pink console on the right.

If it’s just a sticker like the black console, then it’s a fake.