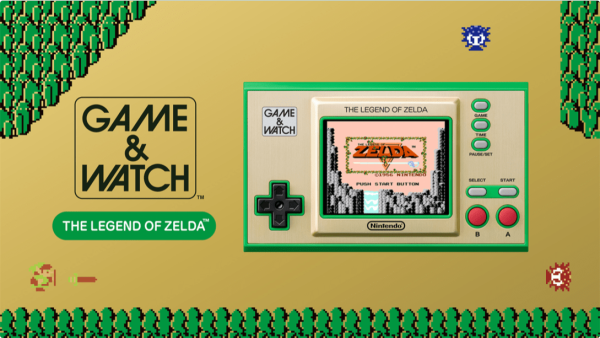 Surprisingly, I really enjoyed the recent Diablo II: Risen which I pre-ordered on the PC… I loved it so much I ended up buying it back on the nintendo switch.

One thing is certain, Nintendo makes very good hardware. The Game & Watch is well made, looks great with the new color scheme (glossy gold and neon green), and the D-Pad and buttons feel great. The best part is that the battery life will last you weeks on a charge. I put the original Mario Bros in off mode and turned it on six months later and it was still holding a good battery charge!

Like I’ve never owned game boy, I never played the original black and white version of Link’s Awakening… however, Nintendo remade the game in 3D and color for the Nintendo Switch in 2018. I purchased and played the Switch version, however , I never beat her . I got to a point in the game where I didn’t know what to do or where to go, so I just gave up. I will probably come back to this game in the future and hope to win the game (or at least just play the original version).

As for the first two original Zelda games, yes, I’m proud to say that I beat them both when I was very young. Our family was fortunate to own the original Nintendo Entertainment System (which came bundled with a light gun and duck hunting)…so I know those original games very well. To beat Super Mario Bros.to beat Zeldaheck, even beat dragon warrior (a.k.a dragon quest).

The sad thing is that now that I’m much older, I don’t think I’ll have time to play and beat Zelda again. I started playing the first game again, entering a cheat code – hold down the A button for a few minutes and the game will start with a full heart.

Using this cheat, I found and beat about three dungeons. At first, the world can be overwhelming… but when I started playing, the world seems much smaller than I remembered.

Either way, I’m having a lot of fun with it. I still have such fond memories of it… and playing it again for the first time in years just reminds me of a simpler time.

I can’t say I would recommend the Game & Watch to anyone, only those who grew up with Nintendo’s original classic. I think it’s overpriced at $50. It should be a $20 or $30 item…if it was in that lower price range, I’d buy them as a gift.

Still, if you’re a Zelda fan, you must have it. It’s small and light enough that you can just put it in a coat pocket.

– Player of the Weekend