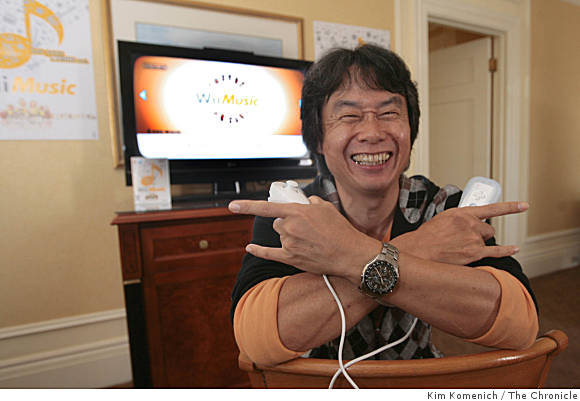 Shigeru Miyamoto, 55, has often been described as the Walt Disney of video games. Formerly Nintendo’s first artist, now its senior general manager, Miyamoto has been responsible for some of the most beloved games in history, including Donkey Kong, Super Mario Bros. and the Legend of Zelda series.

More recently, he helped bring Nintendo back to the top through the development of the best-selling Nintendo DS and Wii systems, which outclassed their competition, redefined the industry and ushered in a new era of gaming. His latest act was to create a wave of casual, family-friendly games like Wii Sports, Wii Fit and its latest title, Wii Music, that encourage all people to use their whole body to play.

We sat down to chat with Miyamoto in San Francisco just days after he received the Champion Award from the Entertainment Software Association, the association of the video game industry in the United States.

Question:Have you ever guessed that you would have this impact on the gaming industry, and did you think the industry would grow to this size?

A: I really didn’t think I would have such an effect on the industry. I expected the industry to grow, but … one of the things that changed, that I didn’t originally expect, was that you had arcade games and this is where you found more technology and premium graphics. And then you had the domestic market. I didn’t think the home console market was where you would see real technological advancements happen. But it clearly has been.

Question:Nintendo, along with the DS and the Wii, has been credited with introducing the game to millions of new users. What was the key to making both systems the best sellers and attracting so many new players?

A: We had a very large audience, but what has happened over the years and generations is that video games have gotten more complicated and the experiences have gotten more in-depth and more difficult. And you have seen society defined in two camps: players or non-players. One of our main goals is to redefine that. One thing we did was shift our corporate focus to the idea of â€‹â€‹making games for everyone, ages 5 to 95. And then we tried to bring the video game back to its point of origin, where video games had an interface and a way of interacting. it was simple enough for everyone to enjoy.

Question:How do you balance the needs of die-hard gamers and all those new users?

A: We will see the video game industry continue to provide games to both groups. But what we’ll see that is different is that there is an idea that there are individual products that can cater to both audiences, I would say. Even now we are seeing it with a game like Wii Music. While there are so-called casual players who enjoy the game a lot, there are so-called grassroots players who have become very big fans. What is very important for Nintendo is to continue to expand the possibilities for all audiences.

A: There is always a tendency to look at what is successful and try to recreate it. It is the safest thing to do in order to be successful in business. But what I try to do from a designer’s perspective and working with the designers on my team, I always try to encourage them to do what they can to convey a part of their personality, a little bit. of their creativity, their own unique flavor. in their own creations. When you have technology you tend to rely on technology more and more and you start to lose that individuality that comes from the creative process, and things start to look the same.

Question:In a sense, you’ve also pushed the boundaries of hardware with DS touchscreens, Wii motion controllers, and the Wii Balance Board. What did you learn about a good relationship between hardware and software?

A: Our relationship with technology is important, but rather than relying on technology to give you ideas of what you can do, it’s important to have ideas about what you want to create and then come up with a technology that allows these ideas to come to life.

Question:Your latest game, Wii Music, has been described as the work of a lifetime. What are the origins of the game and why is it so personal to you?

A: Typically in game design and development I have found … it is my own personal experience that gives rise to ideas for games. Wii Music was a different process. I have been a music fan for many years. For a long time, I thought about the idea of â€‹â€‹making a game about music but I never managed to come up with the right idea to make a game out of it. But then we started developing on the Wii console, and our premise was that it would be a central hub in the living room that everyone could relate to. For that, we needed key themes. One of those key themes was music, so in the development process we started looking at … what can we do with the Wii Remote that can let us create a music experience and we worked from there of the. Watching the game after I finished it I felt, wow, all these years I thought about making a music video game and without realizing it, through the development process we ended up creating the type of experience that I was craving all these years.

Also with Wii Music, we felt that due to the nature of music, we wanted this musical game to be more about creative freedom than specific goals. We have tried to create an experience in the comfort of your living room that explores musical creativity. And what happens while you play, you get the inspiration of where you want to go next. Everything is bubbling inside you. Wii Music is a rare type of experience in which the moment of playing the game is fun for the person playing and also for the person watching. It’s hard to explain … but there is immense joy in making music while moving your body.

Question:How have you seen your career at Nintendo evolve over the years, from the early days of Mario to today with the latest games on DS and Wii? What type of maturation or personal development are you most proud of?

A: I have a much greater degree of freedom. In the past I would develop a game and then finish it and the next question is always: what is the next game we would make? In the last few years, I really discovered that with this idea of â€‹â€‹applying the structure of video games in different ways, I discovered that anything could be a video game, and I found more creative freedom in what I want to do next and explore.

Question:We have written about the growth of games for girls and women and the growing popularity of games for women has a lot to do with Nintendo. What more does the industry need to do to engage women in the game? Where has he fallen behind in the past?

A: It reminds me of something actress Meryl Streep once said that was interesting. She said, â€œWhy is it that even though 50% of the population is female, there are so few films aimed at female audiences? For a long time, the video game industry kind of forgot that half of the world’s population was female, and in recent years, they’ve started to realize this and have started making games that appeal to people as well. a female audience. One of the big things for Nintendo with the Wii is that mothers tend to play a central role in the household. We wanted to create software that … mothers can play with their children. When mothers could view games as something that not only their children would play but that would be relevant to themselves, then we would see games spread into general family entertainment.

Question:When chatting with people who have worked with you, they are always struck by your normalcy and simplicity. Do you take this perspective in designing your game, building for the common man?

A: I feel like I’m just an average person. I think taking this approach is important. You don’t know what part of your average daily life will be an inspiration.

CBBC – Newsround – How to spot a fake Nintendo console