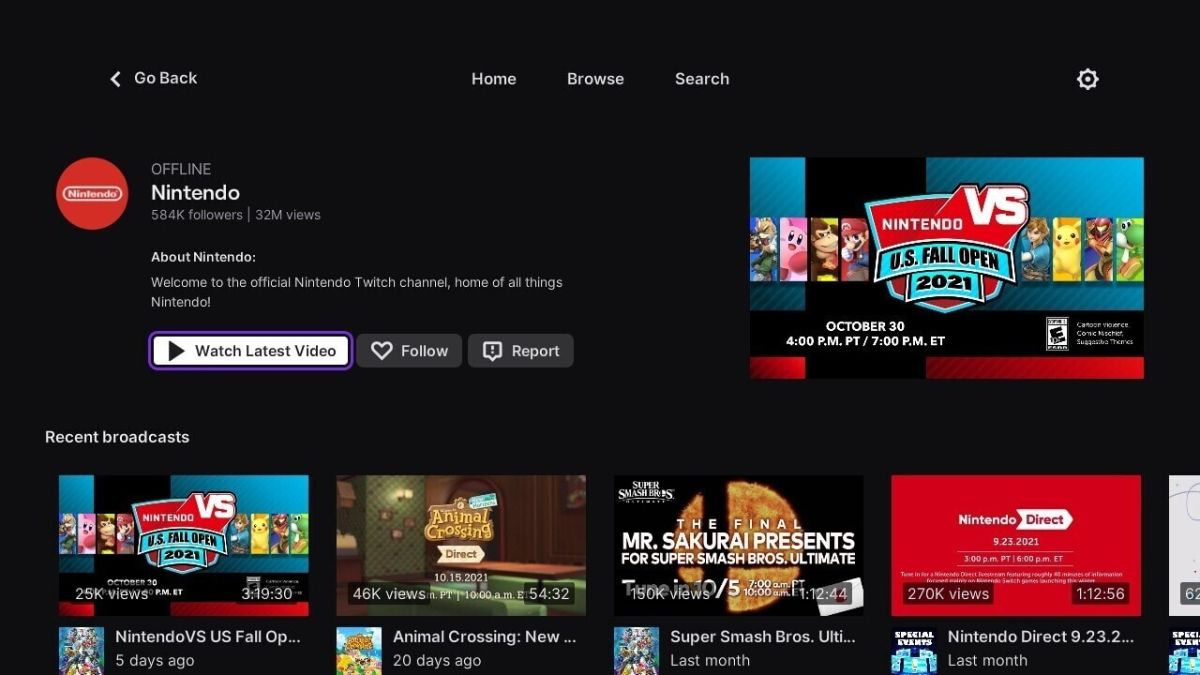 The world’s largest game streaming service, Twitch, is now finally available on Nintendo Switch consoles, although you can only view the content rather than stream it.

Nintendo of America announced via a tweet that the app can now be downloaded (for free) from the game company’s online eShop and run from any of its current consoles – Switch OLED, Switch Lite and the Standard Switch model.

While the core content of Twitch was initially video streams of users playing games, other media like Nintendo Direct announcements, live sporting events, and even talk shows will be ready to air on Switch.

Besides the inability to broadcast your own stream, there are a few other limitations to Switch’s implementation of the Twitch app. The experience is greatly simplified, with a home, navigation and search tab comprising the entire interface.

There’s also no option to view or interact with streaming chats directly on your Switch, instead you’ll need to access them through your smartphone or similar device. Fortunately, you can scan a QR code from the Switch’s Twitch app to quickly access the right stream and chat on your phone.

Likewise, the account and help sections that are typically found in the Twitch app are in the same boat as the chat functionality – you’ll need to access them through your phone and be able to scan a QR code to do so.

While the news of the addition of Twitch to Nintendo consoles is definitely a sign of progress, it’s certainly not groundbreaking when you compare Switch’s limited integration to its rival consoles.

Sony’s PlayStation 5 and Microsoft’s Xbox Series X consoles both launched with app support – both in terms of viewing and streaming capability – and the PS5 even has a dedicated “Create” button on its DualSense controller to allow quick access to players to broadcast their stream.

Nintendo isn’t known to be at the forefront (or even close) when it comes to supporting existing standards. Just two months ago, the Nintendo Switch got Bluetooth audio, allowing the four-year-old console to finally support wireless headsets. Unfortunately, this implementation was flawed and plagued by latency and sound quality issues.

The console also doesn’t support a number of popular apps that are almost ubiquitous on other such devices – Netflix, Disney Plus, and Amazon Prime Video are all missing.

Hopefully, Nintendo’s implementation of Twitch can expand in the future to support game streaming, albeit given its rather locked-down platform and inability to run multiple games or apps in the game. parallel (to the PS5 and XSX), we don’t hold our breath.