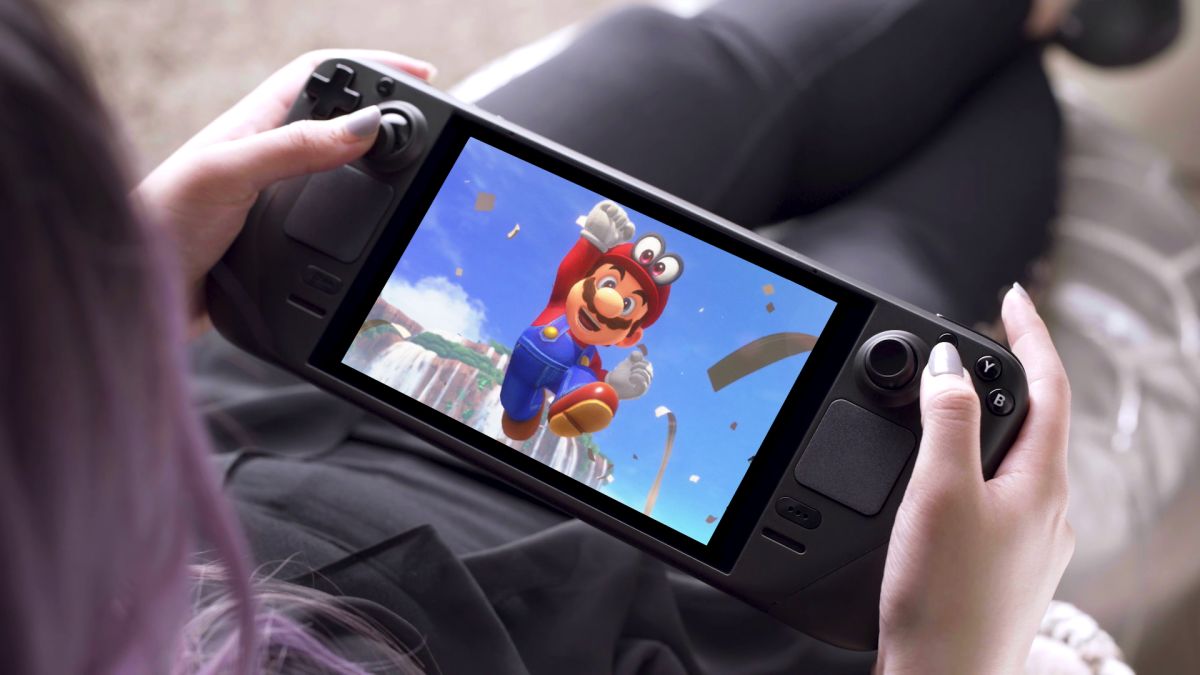 Which Nintendo game would you like to be on PC?

During the last Nintendo Direct, it was announced that the Portal games would be coming to Switch. That’s cool, more people should be playing Portal, and the Switch already has Portal Bridge Constructor. Still, it would be nice if the river turned around and flowed the other way once in a while. You know, like rivers do.

During the same Nintendo Direct, new Fire Emblem, Xenoblade Chronicles, and Splatoon games were announced, along with a Live a Live remake, a new Kirby where you can eat urban foxes and a car or something, and Moreover. This Kirby game looks exactly like the kind of indie platformer with a gimmick that Steam is full of. Release a PC, Nintendo, cowardly version.

Here are our answers, plus some from our forum.

Nat Clayton, Feature Film Producer: I love Splatoon. Before becoming the insufferable person of Apex, I was the insufferable poster of Splatoon 2, and this game is comfortably one of my most played games despite not getting there until long after the end of the major updates. And yet, I’m a little hesitant that it will ever come to PC – it’s a game that’s played not only with analog controls (for fish movements) but also with gyroscopic aiming, which is not yet ubiquitous on PC. lacks text or voice chat beyond prompts for “This Way!” and “Booyah!” work in tense three-minute matches, but would likely be unforgivable on the desk. It manages to look gorgeous and run phenomenally on the Switch like only first-party Nintendo games ever do – and it’s, inevitably, a Saturday morning cartoon without an ounce of irony.

That said, Splatoon is one of the best shooters of the last 10 years, Nintendo’s squids are easily worth mentioning alongside Titanfall 2 and Doom ’16 – and the fact that it’s not talked about as that is probably due to the fact that it is “Nintendo Shooter”. Its ink and swim mechanic is a perfect marriage of map control and mobility, with each weapon balanced not only for damage, but also for how effectively it can lay turf. It’s also a surprisingly good competitive game, as evidenced by my six-month career as a frontline player for a European Splatoon team – frantic and tense 4v4 battles played through unique twists on modes like Payload (Tower Control), One-Flag CTF ( Rainmaker), King of the Hill (Splat Zones) and the weird basketball silliness of Clam Blitz.

Splatoon is so married to the idea of ​​what the Switch is to imagine it fully running on my PC. But hey, I bet the burst of color in this game would appear absolutely full resolution on my 1440p screen at frame rates the Switch could only dream of.

Fraser Brown, online editor: None of them! Unlike the PlayStation and Xbox, the Switch isn’t just a cheap PC that you can’t upgrade. Like all of Nintendo’s consoles, it’s a toy with a lot of quirks, and the best Nintendo games usually take advantage of the system they’re designed for, so moving one of them to PC might cut a lot of that that makes them so memorable. I would never want to play any of these in the office, and while I might stream them to my living room or possibly throw them on the Steam Deck, at this point I’m just going to put in the extra effort to gain experience it’s still not exactly what the developers had in mind.

Jody Macgregor, Weekend/AU Editor: Turn-based strategy games like Advance Wars, Fire Emblem, and Mario + Rabbids Kingdom Battle all belong to PC. I used a GameCube emulator to play the first Advance Wars on my phone, which was fun, but damn it, I want those games on the same box as XCOM and Jagged Alliance. And then I want mods for them. See what people have done with mods to emulate Smash Bros. makes me wish more Nintendo games could get this treatment.

Robin Valentine, editor-in-chief: Nintendo’s Mario Maker games are so clever, inviting even the least creative thugs to design their own tight platforming levels. But they’re utterly crippled by a lack of ongoing support and, more importantly, appalling online features that make sharing your levels with others needlessly inconvenient and unsatisfying.

Take this brilliant base design, put it on Steam, and you’ve got something really special. Proper online functionality, a faff-free friends list, and workshop support for an endless stream of weird mods would give it a chance to build a proper community, rather than just being a flash in the pan. And I’d love to see how weird Nintendo’s mascot world could get with a bunch of degenerate PC gamers pulling it in all directions. Mario with a Portal gun, Mario battle royale, Mario chased by a Bowser with the face of Macho Man Randy Savage… the possibilities would be endless.

Chris Livingston, Feature Film Producer: MLB The Show. Haha! Little joke there. I’m not at all bitter that MLB The Show is now on Switch, and PlayStation 4 and 5 and Xbox One and Series X/S but always not on PC, which badly needs more baseball games! Either way, my default choice will always be Breath of the Wild, as I think there’s no such thing as a great open world game on PC. I know there are probably ways to emulate it but I’m extremely lazy, and I know deep down that the best way to play it is probably on the Switch anyway, but I can always dream that one day Nintendo will throw us a bone (it won’t) and BotW will be legitimately playable on PC (it won’t).

Wooden saucer: I wish all Zelda games came to PC.

flashn00b: Bayonetta 2 and 3, as well as Astral Chain. It just seems pretty criminal that better Devil May Cry games than DMC4 and 5 aren’t on PC, and I remember PC Gamer Magazine’s interview with PlatinumGames about how they want as many of their games be on PC as much as humanly possible, only for that statement to be a load of shit.

And I think that might explain why I oddly agree with Square-Enix’s recent EGS exclusivity deals.

Pifanjr: The Super Smash Bros. series. Especially Brawl and later games because I really liked what little story mode I played from Brawl and it seems like a fun game to play with my wife.

Gray fox: All Xenoblade games could really do with that bit of extra PC horsepower to make them shine.

Komodo: 100% Xenoblade. I can imagine playing Chronicles and Chronicles 2 at uncapped 4k FPS and it would be spectacular. Mario Kart 8 Deluxe would also be really fantastic. And obviously any of the Zelda titles would be a lot of fun, as well as the oft-sleeping Hyrule Warriors spin-offs.

Zloth: I would love to see a full Xeno remake. Start with Xenogears (yes, it’s a PS exclusive, but the other games weren’t). So do it big: Xenosaga. It was supposed to be six games, but they ended up being crammed into three, with the final game jamming the plot threads every time you turned a corner. Start over, do the full six games, and please don’t censor it for the United States. Finally, do the Xenoblade thing.

DXCHASE: MARIO KART!!! The old versions and the new ones in an official capacity. Mario Kart 64 the most. I loved this game growing up.

Alma: I love Mario Kart but an official way to play Zelda Breath of the Wild in high resolution would be amazing!

McStabStab: Mario Party would be pretty awesome for online play on PC, especially if they allowed modding.

Wordle on the Nintendo Game Boy? This guy managed to do it!